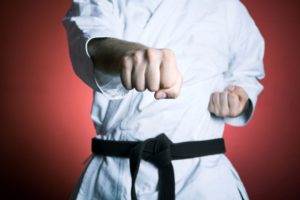 Karate-do is a Japanese martial art. In translation, “Kara” means “empty”, “te” means “hand”, and “do” means “path”. The path of empty hands, or, to be more precise, the path of fighting with bare hands, because in karate there are used arm and foot kicks, sweeps and various blocking techniques.

The founder of the modern karate is considered to be Gichin Funakoshi (1868-1957), the founder of Shotokan style. When he arrived in Japan in 1922, coming from Okinawa (an island of the Japanese archipelago), Funakosi made the karate popular through various demonstration activities and lectures. His purpose being to increase the popularity of his fighting style (Okinawa-te), he named it “karate” in Japanese.

More karate styles developed over time, most of them having the ending “ryu” (Shito-ryu, Goju-ryu, Wado-ryu etc), which in Japanese means “school”.

In all styles, there is kata (the imaginary fight with one or more adversaries) and kumite (the fight with a real adversary).

So all karate contests are in fact kata and kumite contests.

In 1957, after the death of master Funakoshi, the karate became popular in Europe as well. Since then, the sportive, competitional side of it has grown, along with the art of karate-do.

From an organisational point of view, the karate is divided in more federations on a wordwide, European, and national level, the biggest worldwide federation being World Karate Federation (WKF), which has Olympic recognition. This means that the WKF karateka have been able to attend the Olympic Games since 2020.